During these unfortunate COVID-19 times, many funds could be facing issues pertaining to tenure of the fund (including extension, early termination and liquidation).

In this edition of the monthly digest, we have discussed the term, termination and liquidation of Category I and Category II Alternative Investment Fund/s (“AIF” or “fund”) being closed-end funds, registered with the Securities and Exchange Board of India (“SEBI”) under the SEBI (Alternative Investment Funds) Regulations, 2012 (the “AIF Regulations”).

Regulation 13(1) of the AIF Regulations requires the tenure of a Category I and Category II Alternative Investment Funds to be determined at the time of making the application itself. Further, extensions to the tenure are permitted for up to two years with an approval of at least two-third of investors by value.

Typically, an AIF is intended to terminate automatically upon the expiry of its fixed tenure as set out in the relevant fund documents. However, an “early termination” clause is also stipulated in the governing documents of AIFs covering circumstances where an AIF may be wound up prior to its intended automatic expiry. The AIF Regulations also provide for early termination of an AIF.

Fund managers and investors are generally aligned to make best efforts to continue the fund until its originally intended tenure, especially in long term funds where investments are expected to appreciate over time. The underlying objective is to maximize the value from the portfolio, and align the timing of the AIF’s tenure accordingly. The AIF should be able to make an ‘orderly exit’ from the portfolio, so that it is able to realise the expected exit value commensurate with the risk return profile of the asset class.

The AIF Regulations draw a distinction between winding-up (or termination) and liquidation of an AIF1, whereby the latter is expected to take place within a year of the former, as discussed subsequently. This distinction becomes relevant in the context of investor giveback provisions.

INDIAN LEGAL PROVISIONS ON WINDING UP OF AIFS

Regulation 29 of the AIF Regulations (as charted out below) deals with winding up of AIF. 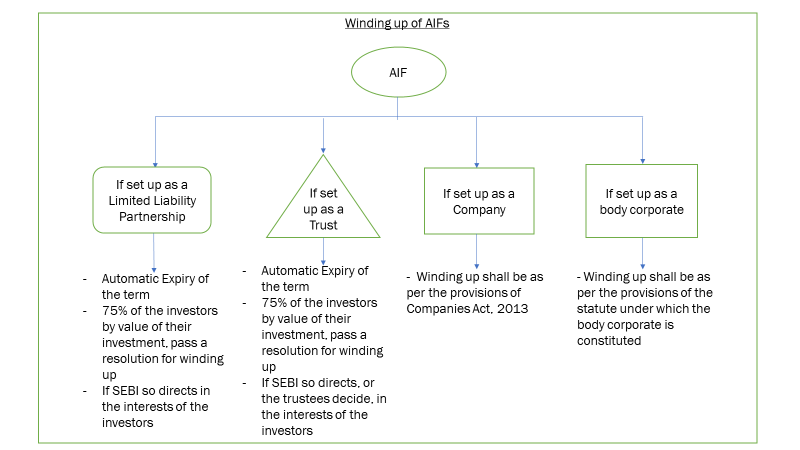 In addition to the above, the winding up of an AIF is also required to be governed by the law under which it is incorporated. For example, the Limited Liability Partnerships Act, 20082 provides for an LLP3 to be wound up compulsorily if there are less than 2 partners in the said LLP for a period of more than 6 months. Therefore, if an AIF is set up in the form of an LLP and has less than 2 partners for a period longer than 6 months, the said AIF may be wound up.

The AIF Regulations also permit the trustee of an AIF which is set up as a trust, to wind up the AIF without any investor consent, as long as the trustee is satisfied that such winding up is in the interests of investors of the AIF4.

Certain fund terms which act in tandem with, or could impact the winding up of a closed-end fund are briefly discussed below:

Termination of a fund is an integral part of its life-cycle, in the same way as a “formation” of a fund is. There may be several reasons for terminating a fund including as stated in IOSCO’s report on good practices on voluntary termination9 being “weak investor demand, unfavourable economic conditions or commercial decisions by the entity responsible for the overall operation of the investment fund..” etc.

In respect of any outstanding tax claims or liabilities arising out of the representations and warranties to the buyer of the portfolio from the AIF, the constitutional documents would provide for investor giveback mechanisms, tax indemnity from investors and carry clawback mechanism. It is unusual to have escrow mechanism set in place for unrealized but possible liabilities at the time of liquidation. However, if at the time of liquidation there are certain realized or ascertained liability, the same may be subject to escrow.

It is imperative to have a definitive mechanism laid down in the constitutional documents of the AIF in to enable efficient liquidation.

In this piece, we have only provided agnostic views for different types of AIFs (ignoring their strategy, nature of LPs, volume of track record etc.). Different views and options can be designed for AIFs depending on their distinguishing factors.

9 Report by The Board of The International Organization 8of Securities Commissions, no. FR23/2017, published in November 2017