Budget 2014-15 (“Budget”) has introduced tax incentives for the real estate investment trusts (“REITs”) regime, and also provided for relaxations in foreign direct investment (“FDI”) regime. With the tax incentives in place, the Securities and Exchange Board of India (“SEBI”) is likely to formally announce the REIT regulations that are currently in draft form. In this hotline, we discuss some of the key changes and its Budget 2014 impact on the real estate sector. For a detailed analysis of the impact of Budget 2014-15 on other aspects as well, please refer to our hotline “India Budget 2014: New Beginnings and New Direction”.

CHANGES IN RELATION TO REITS

As a background, the Securities and Exchange Board of India (“SEBI”) had released the draft regulations on REITs (“Draft Regulations”) for comments on October 10, 2013. The Draft Regulations as released are available here. Though the Draft Regulations were received positively, it was imperative that attendant tax and regulatory incentives were also announced. Now, with the tax incentives announced and effective from October 1, 2014, it seems almost certain that the SEBI will put in place an operating framework for REITs by October 2014. Please refer to our article titled “REIT Regime In India: Draft REIT Regulations Introduced” for a detailed analysis of, and our suggestions on, the Draft Regulations.

Before we move on the tax incentives proposed in the Budget, we set out below a quick snapshot of the REIT structure as contemplated under the Draft Regulations. REITs in India are required to be set up as private trusts under the purview of the Indian Trusts Act, 1882.

(i) Parties: The parties in the REIT include the sponsor, the manager, the trustee, the principal valuer and the investors / unit holders. Sponsor sets up the REIT, which is managed by the manager. The trustee holds the property in its name on behalf of the investors. The roles, responsibilities, minimum eligibility criteria and qualification requirements for each of the abovementioned parties are detailed in the Draft Regulations. Sponsors are required to hold a minimum of 15% (25% for the first 3 years) of the total outstanding units of the REIT at all times to demonstrate skin-in-the-game.

(ii) Use of SPV: REITs may hold assets directly or through an SPV. All entities in which REITs control majority interest qualify as an SPV for the purpose of the Draft Regulations.

(iii) Investment and Listing: Units of a REIT are compulsorily required to be listed on a recognized stock exchange.

(v) Distribution: 90% of net distributable income after tax of the REIT is required to be distributed to unit holders within 15 days of declaration.

The illustration below gives the typical REIT structure: 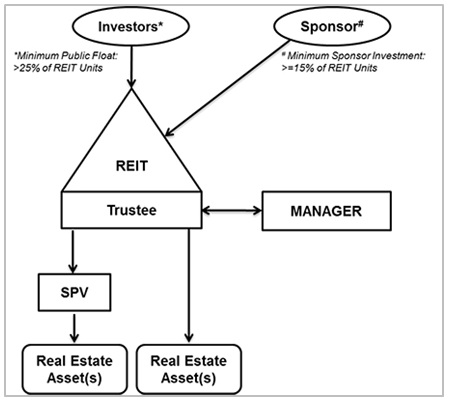 3. Proposed tax regime under the Budget

The Finance Bill, 2014 (“Bill”) proposes to amend the Income Tax Act (“ITA”) to provide for the income tax treatment of REITs. These provisions have been incorporated depending on the stream of income that the REIT is earning and distributing:

(i) Units of REIT akin to listed shares

The Bill proposes that when a unit holder disposes off units of a REIT, long term capital gains (“LTCG”) (units held for more than 36 months) would be exempt from tax and short term capital gains (“STCG”) would be taxed at 15% since units would be treated as listed securities under the ITA. In addition to the above, the Bill has also proposed that securities transaction tax is to be payable on transfer of units of a REIT.

(ii) Tax treatment of the sponsor - The Bill proposes to make the transfer of shares of the SPV into a REIT in exchange for issue of units of the REIT to the transferor (or the sponsor) exempt from capital gains tax under the ITA. However, although the units of a REIT would be listed on a recognized stock exchange, specific amendments are proposed to exclude units of REITs from the exemption of tax on LTCG / STCG if sold by the sponsor; and the cost of acquisition of the shares of the SPV by the sponsor shall be deemed to be the cost of acquisition of the units of the REIT in his hands.

(iv) Income in the nature of dividend - Where dividends are distributed by the SPV to the REIT, the existing provision dealing with Dividend Distribution Tax (“DDT”) under Section 115-O of the ITA would apply and the SPV would face a 15% tax on distribution with no further liability on the REIT as a shareholder. Further, the Bill proposes that any income distributed by the REIT to its unit holder that is not in the nature of interest or capital gains is exempt from income tax. Therefore, distributions of dividends received from the SPV by the REIT to the unit holders would be exempt from tax in India.

(v) Income in the nature of business profits/lease rentals/management fee - Chapter XII-FA is proposed to be added to the ITA by which Section 115UA is to be included for dealing with the taxation of income earned by a REIT that is not in the nature of capital gains, interest income or dividend. All such income is proposed to be taxed in the hands of the REIT at the maximum marginal rate i.e. 30%. Such income, while distributed by the REIT to the unit holders would be exempt in the hands of the unit holders.

(vi) Income in the nature of capital gains - Where the REIT earns income by way of capital gains by sale of shares of the SPV, the REIT would be taxed as per regular rates for capital gains i.e. 20% for LTCG and slab rates for STCG. However, further distribution of such gains by the REIT to the unit holder is proposed to be exempt from tax liability.

RELAXATION IN THE FDI REGIME

In line with the commitment of the government to have housing for all by 2022, and also to promote the Prime Minister’s vision of ‘one hundred Smart Cities’, the Finance Minister in the Budget has proposed key reforms for foreign investment in the real estate and development sector.

The Budget has proposed introduction of schemes to incentivize the development of low cost housing and has also allocated this year a sum of INR 40 billion for National Housing Bank for this purpose. In addition to the above relaxation, to further encourage this segment, projects which commit at least 30% of the total project cost for low cost affordable housing have been proposed to be exempted from minimum built-up area and capitalisation requirements under FDI. The Finance Minister has also proposed to include slum development in the statutory list of corporate social responsibility (“CSR”) activities.

REITs are beneficial not only for the sponsors but also the investors. It provides the sponsor (usually a developer or a private equity fund) an exit opportunity thus giving liquidity and enable them to invest in other projects. At the same time, it provides the investors with an avenue to invest in rental income generating properties in which they would have otherwise not been able to invest, and which is less risky compared to under-construction properties.

For a REIT regime to be effectively implemented, complete tax pass through is essential, as is the case in most countries having effective REIT regimes. Though the tax incentives for REITs introduced in the Budget is definitively a positive move, however, the tax incentives only result in partial tax pass through to REIT, at the maximum. It is hoped that the Finance Minister would address the issues as mentioned in this piece going forward and possibly simplify the REIT taxation regime.

The relaxations proposed in the Budget pertaining to affordable housing is a really positive move as there is a major demand for housing in this segment. All in all, the Budget represents the new government’s positive attitude and willingness to follow through on its message of growth and development, especially in the real estate sector.