The Draft REIT Regulations are the third initiative by the securities regulator to being about a REIT regime in India after a failed attempt to bring in REITs in 20081 and subsequent initiative to bring a REIT regime in the form of real estate mutual funds ("REMF"), which also did not find any takers.2 SEBI has finally sought to encourage investments in real estate as an asset class, and in doing so SEBI has clearly done a commendable job taking into account international models and views of stakeholders.

REITs should likely emerge as a preferred form of asset backed investment with established revenue streams, and will go a long way in protecting the interests of investors seeking exposure in real estate as an asset class. More importantly, REITs may infuse additional transparency and liquidity in the Indian real estate market. With Indian players showing an increased keenness to list Indian real asset listings offshore, especially in SGX, SEBI's move is likely to attract such markets onshore and increase depth of Indian real estate capital markets. From a private equity in real estate perspective, REITs will also create exit opportunities for developers and financial investors allowing them to move completed assets to REIT and provide much needed liquidity in the market. 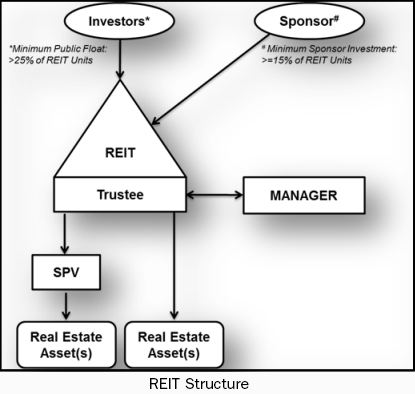 Although the draft REIT Regulations indicate a positive step forward on the part of SEBI, several issues concerning taxation, stamp duty and foreign participation remain. In this Hotline, we analyze few of important provisions of the REIT regime and what additional steps need to be taken to ensure efficacious utilization of the REIT regime in India.

The Draft REIT Regulations have taken cognizance of global standards on REIT regimes and accordingly SEBI appears to have generally followed the 90% rule on investment and distribution. This means that REITs are required to mandatorily invest in such a manner that:

2. Listing and other ancillary issues

SEBI has prescribed extensive valuation, transparency and disclosure requirements for REITs in the draft REIT Regulations:

In general, SEBI is uncomfortable with leverage in investment vehicles. However, considering that globally REITs have significant leverage, SEBI has allowed leverage (on a consolidated basis) to a maximum of 50% of the value of its assets. In this regard, the REIT can avail leverage up to 25% without requiring any additional approvals, beyond 25% a credit rating and approval of 75% of the unit holders of the REIT (by value and number) is required to avail any further leverage.

Sponsors held accountable: SEBI has also sought to ensure that accountability is clearly levied on managers seeking to set up REITs. Following is a brief summary of the obligations imposed on sponsors:

Eligibility criteria for a REIT manager: A recent feature in SEBI issued regulations has been the requirement for both manager entities and employees of such managers to both be adequately qualified. In the draft REIT Regulations SEBI has set out the following as eligibility criteria:

Currently, Regulation 17 of the draft REIT Regulations outlines the provisions for delisting of the units of a REIT. Delisting may be carried out in the situations outlined below. Upon the occurrence of such an event, the REIT will be required to apply to SEBI and the stock exchange for permission to delist.

In our experience in the past, SEBI has insisted on a term being fixed for venture capital funds / alternative investment funds, even when the relevant regulations were silent in that aspect. However, we understand that, in the present instance, SEBI may be comfortable with REITs being conceived as perpetual investment vehicles which can only be terminated in accordance with its terms and accordingly, SEBI may not insist on a fixed term maturity. This would be in line with the global practice, where REITs are structured as perpetual investment vehicles which do not have fixed term of maturity.

Several issues need to be addressed to ensure optimum utilization of the regime.

Currently, most completed real estate assets will be housed in SPVs, and due to substantial costs the promoters of such SPVs (who will also likely be the sponsors of the REIT) may not be able to transfer such assets to REITs for investment purposes. Such costs will be in the region of (i) stamp duty on transfer of land in the region 6 - 8%; and (ii) capital gains tax on the transfer. Promoters would not be able to transfer the real estate asset of the SPV at nominal value as the ready reckoner value will be deemed to be the sale price received (under section 50 C if the asset is held as capital asset, or under 43CA if the asset is held as stock in trade). To that extent, capital gains and stamp duty on such transfer to the REIT should be exempt.

Tax on acquisition of SPV

Tax on distribution of income from REITs

If the REIT holds the SPV, any distributions would be subject to corporate level tax on at the rate of 30% (exclusive of surcharge and cess) plus a divided distribution tax of 15% if the SPV seeks to distribute dividends. Hence, we suggest that the SPV (if held by a REIT) should be exempt from all corporate level taxes, distribution taxes and MAT. Further, the REIT should be given a pass through status (in the same manner as venture capital funds as outlined in Section 10(23FB) of the Income Tax Act, 1961) ensuring only a single level of tax at the hands of the unit holder.

Tax on trading in the units of the REIT

Additionally, since REITs are required to be mandatorily listed on the stock exchange, the same lowered rate of capital gains tax (between 0% and 15%) should be afforded to sale and purchase of units of a REIT (on payment of STT) in a stock exchange as provided to listed shares and units of mutual funds. Amendments will have to be made to Income Tax Act, 1961 and Chapter VII of the Finance Act, 2004 (which set up the securities transaction tax regime in India).

As REITs develop, healthcare, infrastructure and other stabilised yield generating assets may also be rolled into REITs. Such framework was initially considered by the SEBI and will likely be the next progressive step. However, the immediate need of the hour is to address the issues relating to tax and foreign investments without which the REIT regime may not take off as contemplated.

2 Subsequently, SEBI instead sought to bring REITs through the SEBI Mutual Funds regime as a real estate mutual fund ("REMF"). However, the REMF could not take off due to issues relating to tax, restrictive investment and asset criteria and certain other conditions. Please see our then Hotline analyzing the REMF regime when it was introduced, titled 'WILL REMFS OUTSHINE REITS?'

4 Clause 14(b) of the Draft REIT Regulations.

6 Regulation 16(4) of the Draft REIT Regulations.

7 Regulation 18(6) of the draft REIT Regulations.

8 Regulation 21(4) of the draft REIT Regulations.

9 Regulation 21(5) of the draft REIT Regulations.

14 Regulation 19(7) of the draft REIT Regulations.

Foreign investors from Mauritius likely to keep taxman at bay
Quotes: May 20,2022Singapore Court of Appeal allows a non-party to enforce an award
Dispute Resolution Hotline : May 19,2022

Foreign investors from Mauritius likely to keep taxman at bay
May 20,2022

Singapore Court of Appeal allows a non-party to enforce an award
May 19,2022