Waste not, want not: new rules to regulate e-waste

The Ministry of Environment and Forests ("MoEF") has taken the first step towards reducing the alarmingly growing menace of pollutants from the information age. The E - Waste (Management and Handling) Rules, 2011 ("Rules")1 framed under the Environment Protection, Act 1986 ("EPA") were published on May 30, 2011 and have come into effect on 1st May 2012. This step is significant in the light of the fact that India generates about 400,000 tonnes of e waste annually of which 19,000 tonnes are getting recycled.2 The Rules puts the onus on the producers and the consumers for reducing e-waste.

WHAT IS E WASTE?

E Waste has been defined3 in the Rules as electrical and electronic equipment in whole or in parts or rejects from the manufacturing and repair process, which are intended to be discarded. The electrical / electronic goods to which these Rules are applicable are the following:

WHO NEEDS TO COMPLY WITH THE RULES?

The Rules apply to all producers, consumers, bulk consumers, collection centres, dismantlers, recyclers of e-waste. These terms have been defined in the Rules. "Producer" has been defined4 to mean any person who manufactures and sells electrical and electronic equipment under his own brand name or any person who sells assembled electrical and electronic goods under his own brand name or any person who offers to sell imported electronic and electrical equipment. The phrase "offers to sell imported" seems to be quite broad and it seems to bring within its ambit all importers as well as entities engaged in the retail and wholesale of imported electrical and electronic goods. "Consumer" has been defined5 as any user of the equipment. "Bulk Consumer" has been defined to mean bulk users of electrical/electronic equipment and to include entities such as Central Government, State Government, public sector undertakings, educational institutes, multinational organisations, international agencies and private companies registered under Factories Act, 1948 and Companies Act, 1956. While this definition does not specifically mention other entities such as partnerships, limited liability partnerships or sole proprietorships, it seems that all entities that are bulk users of the equipment will come within the ambit of the definition, since it is an inclusive definition. The Rules do not apply to batteries, to micro and small enterprises and to radio-active wastes, which are covered by other regulations.6

WHAT ARE THE OBLIGATIONS OF PRODUCERS?

The collection, storage, transportation, disposal etc of e waste is to be carried out in accordance with procedures laid down by the Central Pollution Control Board ("CPCB") from time to time. The current CPCB guidelines dates back to 2008. It is imperative for the industry to keep track of latest guidelines being issued by the CPCB.

WHAT ARE THE OBLIGATIONS OF CONSUMERS?

Consumers are required to ensure that e-waste generated by them is channelized to authorized collection centers or registered dismantlers / recyclers or returned to the producerâ€™s take-back systems. Bulk consumers have an obligation to maintain records of e-waste generated by them and make such records available for scrutiny by the State Pollution Control Board. They are not required to file any period statements with any authorities.

REGISTRATIONS AND RETURNS TO BE MAINTAINED /FILED 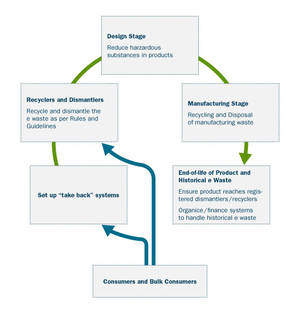 These Rules are a welcome first step in reducing e waste. India has been a destination for dumping of e waste from developed countries. Besides, the domestic electronics / electrical consumption has also grown massively in the last few years making the Rules an imminent and urgent necessity. The onus of handling e waste has been placed on the producers right from the design stage till long after the products have been sold to the end consumer. By requiring producers to reduce the use of hazardous substances in their products, the Rules impose restrictions on the producers right at the design stage. On the other end, by introducing the concept of "extended producer responsibility", it ensures that once the product has reached the end of its life, the producer needs to step in and be responsible for its recycling or disposal. Making consumers also responsible for environmentally sound disposal of electrical / electronic equipment is a laudable step. However, how this provision is going to be implemented needs to be seen. The State and Central Pollution Control Boards will have to play a proactive and dynamic role for an effective implementation of the Rules.

1 The Rules can be found at http://moef.nic.in/downloads/rules-and-regulations/1035e_eng.pdf