Amendments to the Commercial Courts Act

Highlights of the Amendment

The Government, on May 3, 2018, promulgated an Ordinance (Ordinance) amending the Commercial Courts, Commercial Division and Commercial Appellate Division of High Courts Act, 2015 (Act). These amendments are an attempt to expand the scope of commercial courts in India. They will also contribute towards improving India’s ranking on the ‘ease of doing business index’ released by the World Bank (Ease of Business Report).

However, it remains to be seen whether the hastily drafted changes incorporated by way of the Ordinance, achieve the desired effect of increased efficiency in the resolution of commercial disputes or whether they add to the chaos of fluctuating jurisdictions of courts in India. The key changes are discussed hereinbelow.

NAME OF THE ACT

The Ordinance amends section 1(1) of the Act, which now states, “this Act may be called the Commercial Courts Act, 2015.”

With the change in name as “Commercial Courts Act, 2015’, it will send a clear message that there are separate courts with different procedures constituted for resolving commercial disputes.

Comment: This would bring a large number of disputes within the ambit of the commercial courts which were previously outside their scope. It appears that the intent is to meet the parameters used to gauge enforceability of contracts in World Banks’s Ease of Business Report.

The cases considered for the Ease of Business Report are the ones with claim value worth 200% of income per capita or $5,000, whichever is greater. This lead to data regarding the city civil court being considered for gauging the efficiency of enforcement of contracts in India as opposed to the commercial courts and divisions which were constituted under the Act.

With this change, it is expected that the data of the Commercial Courts constituted under the Act would now be used as the pecuniary jurisdiction starts from INR 300,000/- i.e. approx. USD 4,500.

Earlier, commercial divisions of High Courts were established in places where High Courts have OOC Jurisdiction. These divisions dealt with commercial disputes of specified value i.e. INR 10,000,000 (Rupees Ten Million) or higher. However, the specified value is now reduced to INR 300,000 (Rupees Three Hundred Thousand). Accordingly, the Ordinance now establishes commercial courts at the level of district judge even in places where High Courts exercise OOC Jurisdiction. The state government may specify the pecuniary jurisdiction of such Commercial Courts. However, the state government cannot specify an amount which is less than three hundred thousand and more than the pecuniary jurisdiction of the District Courts in the said areas.

The amendments now make provision for constitution of two types of commercial courts in jurisdictions where the high court does not exercise ordinary original civil jurisdiction being:

Comment: The intention behind creating these two types of courts could be linked with the reduction of the specified value. While not stated specifically, it may be that lower value disputes would now be adjudicated by Commercial Courts below the level of a district judge and high-value disputes would go to Commercial Courts at the level of a district judge,

Hierarchy prior to the amendments 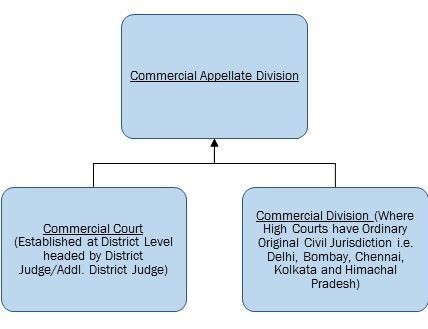 (where high courts do not have ordinary original jurisdiction)

APPOINTMENT OF JUDGES OF COMMERCIAL COURTS

One of the most critical changes introduced through this Ordinance is with respect to the appointment of the judges of commercial courts. Earlier, the state government could appoint those judges only with the concurrence of Chief Justice of the High Court. Whereas, after the amendments, the state government has the power to appoint such judges even without the concurrence of the chief justice of the high courts.

Comment: Given the implications of such provision in relation to the independence of the judiciary and the importance of commercial courts, the constitutionality of this amendment may be amenable to challenge.

The Ordinance inserts Section 12A in the Act. It entails that where a suit does not contemplate urgent interim relief, the plaintiff has to undergo pre-institution mediation. In this regard, authorities constituted under Legal Services Authorities Act, 1987 will be notified and such authority shall complete the process of mediation within three months from the date of application. It further entails that the settlement arrived at by such mediation shall have the status and effect of an arbitral award under section 30(4) of the Arbitration and Conciliation Act, 1996 (“Arbitration Act”).

Comment: Across the globe experience of such pre-institution mediation provisions have been positive. Thus, the institution of this provision is laudatory. However, a culture of making positive use of such mediation and proper infrastructure with experienced mediators needs to be developed for ensuring that the intent behind such provision is met.

The Ordinance also deletes Section 9 of the Act and corresponding section 12(e). Section 9 provided for the transfer of suit to commercial courts if the counter-claim is of the ‘Specified Value’ i.e. (now) INR 3,00,000/-.

Comment: It appears that this change has been made considering the reduction of the specified value to three hundred thousand. It may also be noted that pursuant to Order VIII Rule 6A, a counterclaim can only be made up to the pecuniary limit of the jurisdiction of the court.