Can directors and managers be hauled-up without personal involvement in a crime committed by company? Supreme Court of India clarifies

The Supreme Court (“Supreme Court”) in the recent judgment of Ravindranatha Bajpe v. Mangalore Special Economic Zone Ltd & Ors.,1 has held that the criminal proceedings cannot be kickstarted against the directors and other management personnel of a company in absence of specific allegations and their role in the crime. Following its earlier judgments, the Supreme Court has added yet another piece in the long-standing jurisprudence on vicarious liability of directors and senior management in criminal cases. The main principle being that if a company commits a crime involving a guilty intent, it would normally be the intent and action of the individual who acted on behalf of the company.

In the present case, the Appellant, Mr. Ravindranatha Bajpe (“Complainant”) filed a criminal complaint before the Judicial Magistrate, First Class, Mangalore (“Complaint”) under Section 2002 Code of Criminal Procedure (“CRPC”) against 13 accused persons. The Complainant alleged that he was the absolute owner of a property situated in Bajpe village of Mangalore taluk (“Property”). Mangalore Special Economic Zone Ltd. (“MSEZ Ltd.”) intended to lay a water pipeline by the side of a road abutting the Complainant’s Property. After obtaining requisite permissions from the public works department, MSEZ Ltd. and its directors appointed a contractor (which was a company under Indian Companies Act) (“Contractor”) to execute the said project. The Contractor in turn authorised it supervisors to oversee the works and appointed a sub-contractor (Accused No. 10) (“Sub-contractor”) to execute the works through its labourers (Accused No. 11 to 13) (“Labourers”). It was alleged that MSEZ Ltd., its directors and managers, Contractor’s directors, Contractor’s supervisors, the Sub-contractor and its Labourers together conspired with the common intention to lay the pipeline beneath the Complainant’s Property. In doing so, they had trespassed into the Property, demolished the compound wall, and cut 100 trees on the Property and laid the pipeline beneath the ground. Each one of the accused persons had the common intention to lay the pipeline by damaging the Property. All accused persons therefore, committed criminal trespass and caused a pecuniary loss of more than INR 27,00,000/- (Two Million Seven Hundred Thousand Rupees) to the Complainant. Accordingly, the Complainant prayed that the trial court should take cognisance of the matter and issue process against all accused persons. The Judicial Magistrate, First Class, Mangalore (“JMFC”) accepted the Complaint and directed to register the case against all accused persons (“JMFC Order”) for the offences punishable under Sections 427,3 447,4 5065 and 120B6 read with section 347 of the Indian Penal Code (“IPC”).

Contentions of the Parties

The Complainant inter-alia argued that:

On the other hand, the Respondents / accused persons argued that:

In addition to above, the Supreme Court also placed reliance upon its earlier judgments of Pepsi Foods Ltd. v. Special Judicial Magistrate,10 and GHCL Employees Stock Option Trust v. India Infoline Limited,11 to hold that summoning of an accused in a criminal case is a serious matter. The magistrate has to carefully scrutinise the evidence brought on record and examine if any offence is prima facie committed by any or all of the accused. The prima facie case against the managing director, company secretary, and directors of a company and the role played by them in their respective capacities must be made out before initiating criminal proceedings against such persons.

With the above observations, the Supreme Court dismissed the appeal of the Complainant and upheld the order passed by the High Court and Sessions Court in dismissing the issue of process against the Accused Directors & Managers.

The present judgment is yet another clarion call to action for the criminal courts at lower levels and law enforcement agencies. It is well-settled jurisprudence that where company is the offender, criminal liability can be fastened on directors and management personnel only if there is direct evidence of their active role along with criminal intent in the commission of the crime. The Supreme Court has time and again reiterated these principles. Our analysis on these earlier judgments of the Supreme Court can be found here and here.

Under Indian law, directors or senior management personnel can be held vicariously liable in the following manner.

1. Where the statute itself provides for vicarious liability of directors and other management personnel. For example:

2. If the statute does not expressly provide for vicarious liability, then individuals can be prosecuted only if there is direct evidence of their active role along with criminal intent. A brief snapshot of how liability is fastened on the directors of company under Indian law is provided below: 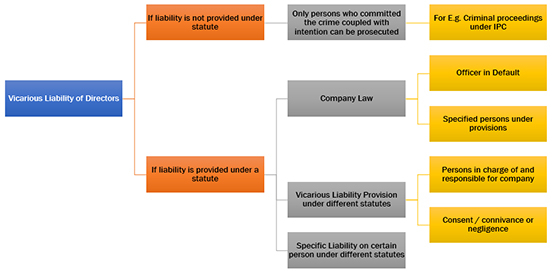 The lower courts and investigative agencies have largely remained oblivious to this jurisprudence. Consequently, it is now beginning to provide another tool in the hands of malicious litigants, who are using it against innocent individuals acting as directors of the companies. It is believed that unless the lower courts and investigation agencies are properly sensitised about this jurisprudence, directors of the companies would get rounded up and proceeded against for crimes simply on account of being a director. On the other hand, wrongful actions against directors, if initiated, must be quashed at the earliest instance without subjecting the innocent persons into protracted litigation. This will help to retain the right talent at the top level for India Inc. and also give sufficient impetus to ease of doing business in India.

3 S. 427 The Indian Penal Code 1860: whoever commits mischief and thereby causes loss or damage to the amount of fifty thousand rupees or upwards, shall be punished with imprisonment of either description for a term which may extend to two years, or with fine, or with both.

5 S. 506 The Indian Penal Code 1860: whoever commits, the offence of criminal intimidation shall be punished with imprisonment of either description which may exceed two years, or with fine, or with both.

6 S. 120B: The Indian Penal Code 1860 whoever is a party to a criminal conspiracy to commit an offence punishable with death, [imprisonment for life] or rigorous imprisonment for a term of two years or upwards, shall, where no express provisions made in this Code for the punishment of such a conspiracy, be punished in the same manner as if he had abetted such offence.

7 S. 34 The Indian Penal Code 1860: when a criminal act is done by several persons in furtherance of common intention of all, each of such persons is liable for that act in the same manner as if it were done by him alone.

12 S. 128(6) The Companies Act 2013: If the managing director, the whole-time director in charge of finance, the Chief Financial Officer or any other person of a company charged by the Board with the duty of complying with the provisions of this section, contravenes such provisions, such managing director, whole-time director in charge of finance, Chief Financial officer or such other person of the company shall be punishable with imprisonment for a term which may extend to one year or with fine which shall not be less than fifty thousand rupees but which may extend to Five lakh rupees or with both.

13 See for example: S. 141(2) of Negotiable Instruments Act, 1881: where any offence under this Act has been committed by a company and it is proved that the offence has been committed with the consent or connivance of, or is attributable to, any neglect on the part of, any director, manager, secretary or other officer of the company, such director, manager, secretary or other officer shall also be deemed to be guilty of that offence and shall be liable to be proceeded against and punished accordingly.

14 S. 128(6) The Companies Act 2013, S. 42(2) Foreign Exchange Management Act 1999: where a contravention of any of the provisions of this Act or of any rule, direction or order made thereunder has been committed by a company and it is proved that the contravention has taken place with the consent or connivance of, or is attributable to any neglect on the part of, any director, manager, secretary or other officer of the company, such director, manager, secretary or other officer shall also be deemed to be guilty of the contravention and shall be liable to be proceeded against and punished accordingly.