FACTS OF THE CASE

Sony India is a wholly owned subsidiary of Sony Corporation, Japan (“Sony Japan”). Sony India is engaged in assembly and distribution of colour televisions and audio products and also the distribution of high-end electronic goods recordable media tapes, play stations, projectors and spare parts required for these goods imported from its foreign associated enterprises (“AEs”). Sony India also renders advisory services and software development services to its AEs. The revenues of Sony India are generated mainly from assembly and sale of colour televisions and trading of other electronic goods. A diagrammatic representation of the structure of Sony India and its AEs is depicted in the chart below: 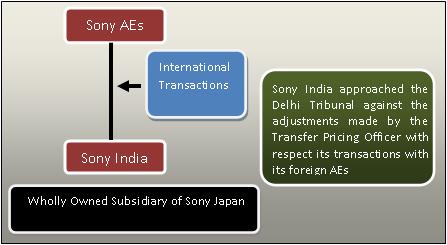 The extant Indian Transfer Pricing Regulations require Sony India to conduct all transactions with its AEs at an Arm’s Length Price (“ALP”). Sony India claimed that all its international transactions were undertaken at ALP and for this purpose relied upon Transactional Net Margin Method (“TNMM”). For the purpose of calculating the ALP, Sony India had chosen the foreign AEs from whom the components were imported as tested parties and computed the profits of AEs with Indian comparables chosen from Indian data base. The same method was chosen for the distribution activities relating to high-end electronic products, projector tapes etc. where Sony India was taken as the tested party. However, the Transfer Pricing Officer (“TPO”) did not agree that foreign AEs could be taken as tested parties for determining the ALP and accordingly asked Sony India to submit fresh transfer pricing report taking Sony India as a tested party and Indian entities as comparable. The TPO made certain transfer pricing adjustments to the income of Sony India which were adopted by the Assessing Officer.

DECISION OF THE TRIBUNAL

The Tribunal heard the parties at length and thereafter pronounced a detailed order dealing with the various issues at hand. The Tribunal placed heavy reliance upon the on the rulings in M/s Aztec Software & Technology Services Ltd. vs. ACIT1 and in Mentor Graphics (Noida) Pvt. Ltd. vs. Dy. CIT2 wherein the principles applicable under the Indian transfer pricing regulations were discussed elaborately. The Tribunal also made references to the International jurisprudence with respect to transfer pricing where the Indian law and jurisprudence is lacking.

The order of the Tribunal has been summarized hereunder:

Doctrine of Form over Substance

The Tribunal discussed the doctrine of form over substance and held that fiscal laws require that actual transactions entered into between parties should be given due consideration and the tax authorities should not unnecessarily try and read between lines. It further observed that the tax authorities had no right whatsoever to re-write the transaction unless the transaction is sham or bogus and has been entered into in bad faith for the purpose of evading tax. It also examined and concurred with the OECD Regulations and the US Transfer Pricing Regulations which provide that the agreements entered into between the parties should be respected if the terms are consistent with economic substance of the underlying transaction.

The Tribunal also discussed the controversy with respect to the selection of comparables for the purpose of the transfer pricing analysis. It made an observation to the effect that an entity can be taken as a comparable for the purpose of economic analysis if its related party transactions do not exceed 10 to 15% of its total revenue and that within this limit, transactions could not be held to be significant to influence the profitability of the comparable.

Use of Loss making comparables

The Tribunal also mentioned that the argument of the tax authorities with respect to rejection of loss making companies was untenable. It observed that factors such as losses should not be considered singly but the cumulative effect of the same along with other factors should be taken into consideration.

Emphasis on broader set of comparables

The Tribunal referred to the OECD guidelines to emphasize that a large number of similar entities should be taken as comparables to make a broad based comparison for the purpose of determining the ALP.

As regards the export of colour TV sets to Sony Japan, Sony India has made a claim that these TVs were assembled and exported to Sony Japan for the purpose of utilizing idle capacity of assembling facilities and therefore, to enable the company to improve recovery of its fixed assembly cost. The Tribunal held that under-utilization of capacity could not justify export of Colour TVs at a price less than the price to any unrelated party. The Tribunal further observed that it was essential to show that similar prices were being charged for similar products in identical circumstances.

Adjustment of + / - 5 percent of the arithmetic mean

The Tribunal placed reliance on the judgment by the Kolkata Tribunal3 and held that Sony India was entitled to the benefits of second part of the proviso to Section 92C(2) of the Income Tax Act irrespective of the fact that price of international transaction disclosed by them exceeds the margin ( +/- 5% to the arithmetic mean) provided in the provisio.

This judgment sets the pace for the gradual evolution of Indian transfer pricing jurisprudence. This order of the Tribunal is being welcomed by all quarters because of the pragmatic approach taken by the Tribunal on various issues which needed clarification for a long time.