In The Correct Space

The Authority of Advance Rulings (“Authority”), in the case of Indian Space Research Organization (“ISRO”)1 was faced with questions of characterization and taxability of income of a non-resident company, arising from leasing of “Navigation Transponder Capacity” of its satellite to an Indian resident.

In this case ISRO Satellite Centre (“Applicant”) had entered into a contract with one M/s Inmarsat Global Ltd., UK (“Lessor”) for leasing the “navigation transponder capacity” of a satellite owned by the Lessor. The navigation transponder capacity of the satellite consists of certain transponders aboard the satellite, which orbits the earth at an altitude of 36,000 kilometers. This capacity can be used by the Applicant by sending data to the transponders through its ground stations. The transponders in turn transmit corrected and more accurate signals, which can be used by the Applicant for better aeronautic navigation. In consideration, the Applicant pays a fixed annual charge to the Lessor irrespective of actual use. 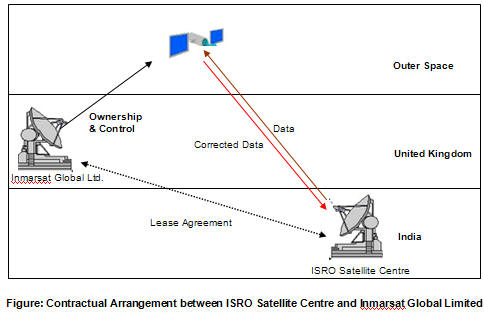 The crux of the controversy before the Authority related to the characterization of the income of the Lessor. The question was whether the above contractual arrangement resulted in the “use of” or “right to use” any industrial, commercial or scientific equipment of the Lessor, by the Applicant, so as to characterize the consideration as ‘Royalty’, as income taxable in India under Article 13.3(b) of the Double Tax Avoidance Agreement between India and the United Kingdom and Section 9(1)(vi) of the Income Tax Act, 1961.

The Applicant submitted that there was no use by or no right to use vested with it pursuant to the arrangement, as the satellite was controlled and operated by the Lessor and the Applicant had no role to play in the same. The Income Tax Department (“Revenue”), on the other hand, submitted that the Applicant indeed used the transponders in a manner analogous to the operation of a television remote controller.

The Authority, however found it difficult to accept the contention of the Revenue. It held that merely because the transponder automatically responds to data commands sent from a ground station of the Applicant, it does not imply that the Applicant controls or operates the transponders. In case of a television set, it stated that the remote control device is a mere accessory and the owner of the television set is the real operator. It was observed that the ground station of the applicant is an independent unit and not an accessory to the satellite. Relying on its earlier ruling in the case of Dell International Services (India) Pvt. Ltd.2 the Authority noted that there was no positive act on the part of the Applicant in order to control or operate the transponders or the satellite. It held that neither was there any “use of” nor any “right to use” any industrial, commercial or scientific equipment of the Lessor, by the Applicant, so as to characterize the consideration as royalty income as taxable in the hands of the Lessor.

With the successful launch of the Chandrayaan - I 3, India is fast establishing itself as a major player in the space industry, but cannot do so without creating synergies with other nations. In this era of globalization there is a need for optimal integration of national economies into the international economy through trade, capital flows, migration, spread of technology etc. However, taxation can distort this equation of optimal integration. This ruling is not only correct in its interpretation of the law, but also goes a long way in augmenting India’s spatial foray.