The Vodafone Judgment: Tax Uncertainty for M&A and PE Deals

One of the most anticipated judgments in recent times, the Order of the Bombay High Court (“Court”) in the Vodafone controversy, is finally out. This judgment raises uncertainties with respect to taxation of cross-border mergers and acquisitions between two foreign entities, involving direct or indirect subsidiaries or affiliates in India. It also brings uncertainty to private equity funds which acquire shares of foreign companies in a similar fashion.

We had published our detailed commentaries on the Vodafone Controversy as it had unfolded in the courtroom and we do not wish to spill more ink recounting the arguments, which are available at the footnote.* The broad facts of the case are briefly summarized as follows:

Shares of CGP Investments, a company incorporated in the Cayman Islands were transferred by HTIL, another Cayman Islands company to Vodafone International Holdings BV (“Vodafone”) for a consideration of about USD 11.1 billion. CGP Investments held stake in a series of Mauritian and Indian Companies which cumulatively held about 67% stake in Vodafone Essar Limited (“VEL”). The Indian Revenue Authorities (“Revenue”) issued show cause notices (“Notices”) to both Vodafone and VEL as to why they should not be held as “assesses in default”, the former on the ground of failure to withhold taxes at source and the latter as a “representative assessee”. Both VEL and Vodafone filed respective writ petitions before the Court challenging the validity of these Notices 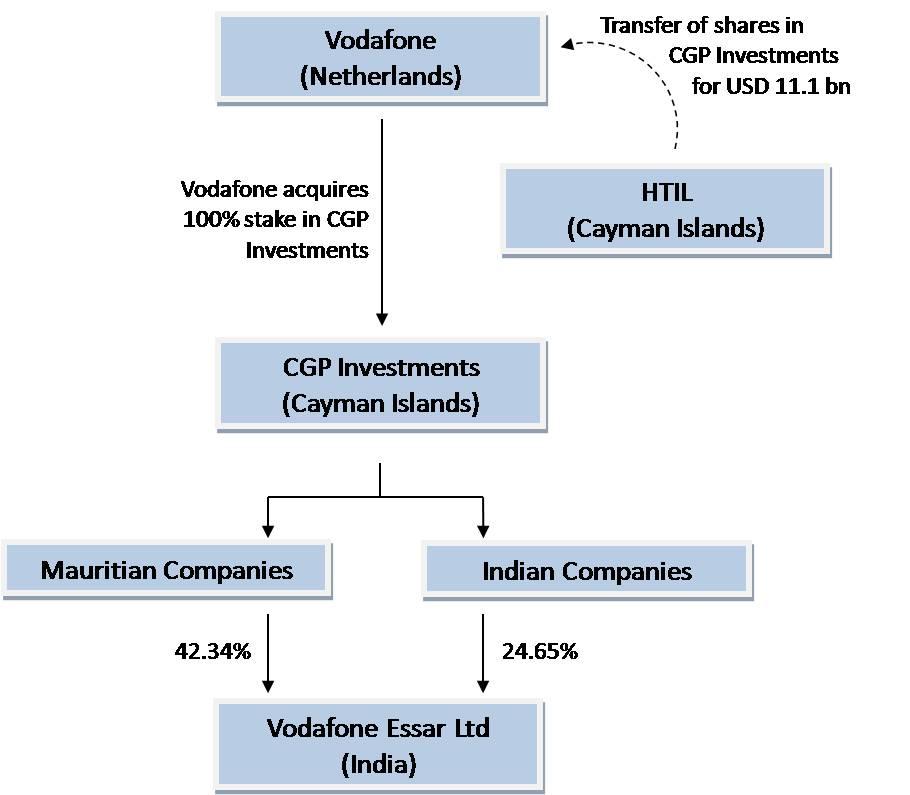 It must also be pointed out that while the Court made the above observations, it has not held that Vodafone is liable to pay tax or penalties under the ITA.

It is pertinent to note that the Vodafone controversy is not limited to the writ petition filed by Vodafone but also the writ petition filed by VEL. However, the order seems to dismiss the entire controversy solely on the submissions made by Vodafone without hearing the submissions of VEL. With due respect, this seems to be in the teeth of the principles of natural justice which require a party to be heard before any judgment is passed.

While the writ petition has been dismissed by the Court, the issues relating to the Vodafone controversy have not been settled and the Order leaves much to be desired.