The Ministry of Home Affairs(“MHA”), FCRA Wing has recently issued an order1 allowing Non-Governmental Organisations (“NGOs”) to file an online revision application before the Union Secretary, MHA. The order is set to be implemented from September 1, 2022. The MHA in exercise of its powers under Rule 20 of the Foreign Contribution Regulation Rules, 2011 (“FCRR”) has permitted any person or NGO aggrieved by an order of the Central Government to file a revision application under section 32 of the registered under the Foreign Contribution Regulation Act, 2010 (“FCRA”).

Over the past three years, the MHA has cancelled FCRA registrations of nearly 1,811 entities. The Government has cancelled these licenses citing “violations” of FCRA rules. In the past, in cases where the FCRA registration was cancelled or not renewed the affected NGOs approached the Court. However, it has been observed that both non-renewal and cancellation orders have been passed without providing any speaking reasons to the NGOs. Over 6,000 NGOs whose licences had been revoked had filed a petition in the Supreme Court for relief. However, the Supreme Court denied their appeals. 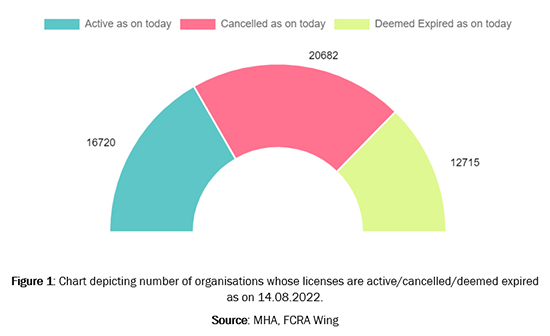 The present total number of FCRA registered associations in India is 16,720. In order to receive foreign grants, NGOs in India must register with the MHA, which assigns a unique FCRA registration number; which has to be renewed every five years. Any organization who wishes to file an application for revision of an order may upload a scanned copy of its application on the FCRA web portal2 under main heading “Services under FCRA”, sub heading “Revision Application against Section 32, FCRA 2010. NGOs will be required to submit documents clarifying their stand regarding any adverse input flagged by the competent authority.

It is pertinent to note that the application must be made within a year from the date on which the cancellation order has been communicated or the date on which it otherwise came to know of it; whichever is earlier. The organisation shall be required to pay a fee of three thousand rupees (INR 3,000) and provide a “justification for the revision order” along with other relevant documents.

(The authors would like to acknowledge and thank Ms. Shhreiya Agarawal (volintern) for her assistance to this hotline.)