GPs globally have used GP led secondary transactions (such as strip sale, extensions, continuation funds etc.) when in the opinion of the GP, the investments would not yield the expected returns at the originally expected due time of making exits for closed-end funds (each, a “Fund”).

The Fund is expected to exit its investments during the harvesting period, and in any case, upon the completion of its tenure. However, sometimes it may be more conducive from a value generation perspective to have a longer holding period for some of these investments. This requires a fine balance of expectations as not all LPs may be on board with extending the holding period and may prefer liquidity by the end of the originally communicated tenure of the Fund. 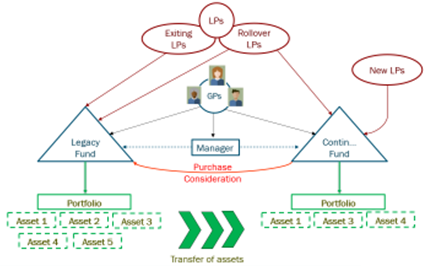 Typically, GP-led secondaries may be in the form of offers to investors (strip sale or tender offer) and / or restructuring of the Fund (extension of term with LP secondaries or launching a new fund). Hence, such transactions may be structured as inter-alia (i) multi-asset continuation fund; (ii) single-asset continuation fund; (iii) portfolio sale; (iv) tender offers and (v) as stapled transactions.

While approaching the end of a Fund’s tenure, if the GP recognizes the need to continue to hold certain assets for longer, and is able to demonstrate the same to its LPs, the GP may request its LPs for an extension of the term to continue its investment in certain assets.

In some cases, where no further extension is permitted under law, or if most of the LPs would like to exit and certain new LPs are buying into the continuing assets, such new LPs may prefer participating through a new fund vehicle to avoid any legacy issues with the existing Fund (the “Legacy Fund”). In such cases, the Legacy Fund is wound up and the ‘rollover LPs’ as well as the continuing assets are transferred to a new Fund and new LPs also participate in such new fund (the “Continuation Fund”). Bringing in new LPs with additional capital is likely to strengthen the argument for a Continuation Fund for the GP, and justify the costs of setting up a new legal structure.

In India, the tenure of a closed-end alterative investment fund (“AIF”) is required to be ascertained and disclosed at the time of launch of the fund. The AIF is permitted to extend its tenure for two additional years with two-third of LPs by value approving such extension. The practical issue which will arise in the Indian context for a Continuation Fund is that it takes at least a couple of months to obtain a license to launch an AIF in India (which is not a scheme of an existing AIF). The need for a Continuation Fund often arises towards the end of the Legacy Fund’s tenure, and the GP does not have the benefit of time to wait for regulatory licenses. While launching a new scheme is an option, the legacy issues for new LPs cannot be wished away in a scheme structure because there is no legal ring-fencing of assets and liabilities between different schemes of an AIF.

While it may have been a panic planning strategy for GPs a decade ago, the emergence, relevance and acceptance of Continuation Funds in the present-day context is different (in a good way!). However, formation of Continuation Funds, as well as allocation towards Continuation Funds (whether as a rollover LP or a new LP) would come with a complex set of legal, tax, regulatory and governance issue, and each structure should be examined differently depending on factors such as the GPs’ realized track record, the assets being continued, the risk profile of the LPs considering a rollover, size and substance of the new LPs participating in the assets, efficiencies of leveraging an existing structure as compared to launching a new vehicle, and the valuation procedure being adopted by the GP.