In a welcome move that is likely to bolster promoter funding, and raising of monies overseas by non-resident shareholders, the Reserve Bank of India (“RBI”) has vide circular (“Circular 57”) issued on May 2, 2011[1] relaxed the provisions relating to pledge of shares in respect of foreign direct investments (“FDI”) related transactions. Until now, certain designated banks qualifying as Authorised Dealers Category – 1 (“AD”) could only convey ‘no objection’ to the resident eligible borrowers under the extant External Commercial Borrowings (“ECB”) guidelines for pledge of shares. However, by way of Circular 57, the RBI has delegated the power to the AD to allow the pledge of shares of an Indian company by non-residents in favour of Indian and overseas banks, subject to certain conditions as listed herein below.

Under the extant exchange control laws, no person resident outside India is permitted to transfer any shares[2] except by way of a gift[3] or sale[4]. Since, the term ‘transfer’ is defined to include sale, purchase, exchange, mortgage, pledge, gift, loan;[5] and exception was provided only for ‘gift’ or ‘sale’, other forms of transfer such as pledge were deemed as not being permitted without prior RBI approval.[6]

The changes brought by Circular 57

In an endeavour to further liberalise, rationalise and simplify the processes associated with FDI flows to India and reduce the transaction time, RBI has issued Circular 57 deregulating the pledge of shares in favour of domestic and overseas banks. Circular 57 obviates the need for prior approval of the RBI in case of pledge of shares of an Indian company by a non-resident by delegating the powers to the AD banks to allow the same in the following cases: 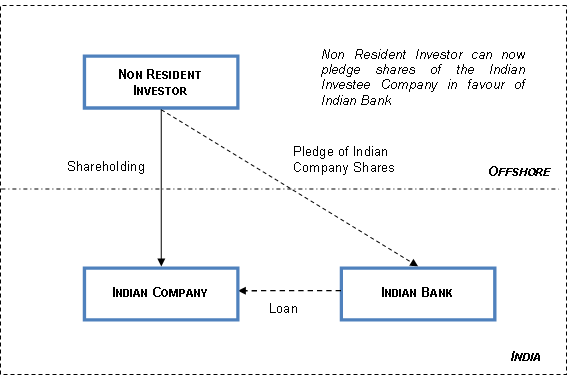 Shares of an Indian company held by the non-resident investor can now be pledged in favour of an Indian bank in India to secure the credit facilities being extended to the resident investee company for bonafide business purposes subject to the following conditions: 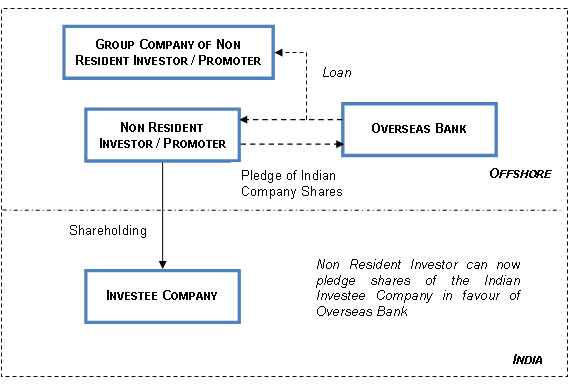 Time efficient: To obtain prior approval of the RBI for pledge of shares of an Indian company by non-residents, it generally took about 12-14 weeks. However now, since the powers have been delegated to the AD, this period is likely to be substantially reduced to a few days.

Raising monies in India: Non-resident shareholders wanting to raise debt for the Indian company could not earlier easily leverage their shareholding in the Indian company as collateral for such debt as it required prior RBI approval. Generally, RBI has always had reservation over leverage being created against foreign shareholding in favour of Indian lenders as it is perceived as an indirect leverage by non-residents in India. On the other hand it was always a preference for the non-resident shareholder to create leverage against their Indian ownership as against other assets. Pledge being a relatively liquid form of security, banks in India too insisted on promoter shareholding to be pledged against the loans advanced to the Indian company. With Circular 57 now expressly permitting pledge of shares by non-residents against loans advanced to the Indian investee company, an important channel for funding growth capital of such Indian investee companies has been opened up.

Repatriation of proceeds: Section 176 of the Indian Contract Act (“ICA”) provides that upon the default of the pledgor, the pledgee may (a) bring a suit against the pledgor upon the debt or promise, and retain the goods pledged as a collateral security; or (b) sell the goods pledged, only by giving the pledgor reasonable notice of the sale. Therefore, a pledgee can only sell the shares and not assume ownership. Upon sale too, after recovering its dues, if any excess monies remain, the pledgee is required to return it to the pledgor. Though, it seems that repatriation of excess monies in case of pledge under Circular 57 should be permitted, in the absence of any specific provisions permitting such excess repatriation, it remains to be seen whether such repatriation will require prior regulatory approval or not.

Ceiling price: The extant FDI policy provides a maximum price beyond which a non-resident cannot sell its shares to an Indian resident. In case of unlisted shares, it is valuation done as per the discounted cash flows method, and in case of listed shares, it is the price at which a preferential allotment of shares can be made under the Securities and Exchange Board of India guidelines (together, the “Pricing Norms”). As the pledgee sells the shares to the proposed purchaser merely on behalf of the pledgor, if the proposed purchaser is a resident, it would still be a transfer from non-resident to resident. In such case, it does appear that the Pricing Norms may be applicable. Since Circular 57 provides that “in case of invocation of pledge, transfer of shares should be in accordance with the FDI policy in vogue at the time of creation of pledge”, it remains to be seen Pricing Norms as of which date shall be taken into account - the pledge creation date (when a mere contractual encumbrance is created) or the actual transfer date.

What also remains to be seen is if the pledgee will be required to ensure that such Pricing Norms are complied with at the time of the sale, and how will the sale proceeds in excess of the ceiling price be appropriated by the pledgee.

Promoter funding overseas: RBI has now not only provided the flexibility to non-residents to pledge the shares of the Indian company to an overseas bank for raising debt for the bona fide business purposes of the non-resident Investor itself, it has also extended this leeway to facilities raised by the overseas group companies of the non-resident shareholder. This relaxation is a major step towards facilitating promoter funding and is likely to be welcomed by non-residents investors who were looking to raise monies abroad for their own business purposes by leveraging on their Indian shareholding. This could also facilitate overseas buyouts by groups overseas, especially ones which have substantial assets in India, as they will now be able to leverage on Indian assets for such acquisition, which hitherto required prior RBI approval.

or a ‘group’ as defined in the Competition Act, 2002, mentioned herein below:

“"group" means two or more enterprises which, directly or indirectly, are in a position to

(i)       exercise twenty-six per cent. or more of the voting rights in the other enterprise; or

(ii)     appoint more than fifty per cent. of the members of the board of directors in the other enterprise; or

(iii)    control the management or affairs of the other enterprise;”

Restricted sectors – Real estate: The impact of pledge of shares of certain restricted sectors such as real estate needs to be particularly analyzed. Since, an investor in a real estate sector is locked-in for a period of three years from the date of each tranche of investment, shares pledged by the non-resident shareholder may not be able to be invoked by the pledgee bank until the expiry of the lock-in period. Further, in case of transfer from a non-resident to another non-resident, since the regulatory approach seems to be that (i) the non-resident transferee would be subject to lock-in restriction; and (ii) the acquisition of shares by non-resident transferee would be considered a fresh “investment” and the lock-in restriction would be reckoned from the date such shares are acquired by the transferee, irrespective of the length of time that the transferor held the shares; the non-resident to whom the overseas pledgee bank transfers the shares may also be subject to fresh lock-in. This may impede the marketability of the shares of such restricted sectors to be provided as collateral having a direct impact on the ability of the overseas bank to sell the shares offshore.

Banks and not financial institutions: Though relaxation granted by RBI for pledge of shares of Indian companies by non-residents is a welcome move, it has been restricted to only loans availed from banks, Indian and overseas. Since, financial institutions contribute significantly in lending transactions and may also be fairly regulated entities (such as IFCI, IDBI etc.), extending the relaxation to them, would certainly have been helpful. This would be even more helpful in cases where the banks have exhausted their limits under Section 19[8] of the Banking Regulation Act, 1949, which provides that a banking company cannot hold shares in any company, whether as pledgee, mortgagee or absolute owner, of an amount exceeding thirty per cent of the paid-up share capital of that company or thirty per cent of its own paid-up share capital and reserves, whichever is less.

Though cautious, but Circular 57 is a big step taken by RBI towards relaxation and liberalization of the FDI policy. Allowing non-residents to pledge shares in favour of banks, Indian and overseas, is not only going to simplify and quicken the process of raising monies in India, but will also help in promoter funding which has been a significant industry demand for a while. However, there are few creases still pending, which if ironed out, will allay any apprehensions pertaining to the actual implementation of Circular 57.

2 Regulation 3 of the Foreign Exchange Management (Transfer or Issue of Security by a Person Resident Outside India) Regulations, 2000 (“TISPRO Regulations”)

(a) the undertaking of any business which, under clauses (a) to (o) of sub­section (3) of section 6, is permissible for a banking company to undertake, or

(b) with the previous permission in writing of the Reserve Bank, the carrying on of the business of banking exclusively outside India, or

(c) the undertaking of such other business, which the Reserve Bank may, with the prior approval of the Central Government, consider to be conducive to the spread of banking in India or to be other wise useful or necessary in the public interest.

Explanation. -For the purposes of section 8, a banking company shall not be deemed, by reason of its forming or having a subsidiary company, to be engaged indirectly in the business carried on by such subsidiary company.

Provided that any banking company which is on the date of the commencement of this Act holding any shares in contravention of the provisions of this sub-section shall not be liable to any penalty therefor if it reports the matter without delay to the Reserve Bank and if it brings its holding of shares into conformity with the said provisions within such period, not exceeding two years, as the Reserve Bank may think fit to allow.

(3) Save as provided in sub-section (1) and notwithstanding anything contained in sub-section (2), a banking company shall not, after the expiry of one year from the date of the commencement of this Act, hold shares, whether as pledgee, mortgagee or absolute owner, in any company in the management of which any managing director or manager of the banking company is in any manner concerned or interested.

(4) Save as provided in clause (c) of sub-section (1), a banking company may form a subsidiary company to carry on the business of credit information in accordance with the Credit Information Companies (Regulation) Act, 2005."