In the backdrop of the slump in foreign investments into India in the last few quarters1, the Department of Industrial Policy and Promotion under the Ministry of Commerce (“DIPP”) released the revised Consolidated Foreign Direct Investment Policy (“FDI Policy, 2011”), effective from April 1, 2011, as part of the six-monthly updating to the Consolidated FDI Policy. FDI Policy, 2011 takes a more calibrated view on some of the issues that impeded foreign investments into India. However, while the issue concerning upfront determination of conversion price for a convertible instrument has been resolved, the FDI Policy, 2011 does not seem to fully address the proposals that foreign investors have been clamoring for – opening up of retail sector, allowing investments in limited liability partnerships (“LLPs”), raising of FDI limit for insurance and the overall liberalization of India’s foreign direct investment policy.

We hereby analyze some of the key modifications made by the FDI Policy, 2011 vis-à-vis its previous version.

A.     Pricing of Convertible Instruments

In India, foreign direct investment (“FDI”) by investors can be made only into equity and equity-linked instruments that are compulsorily convertible into equity shares. At the time of making investments, the investors (especially private equity (“PE”) / venture capital (“VC”) investors) more likely prefer to invest by way of subscription to convertible instruments for various reasons like bridging the valuation gap, to achieve downside protections like anti-dilution, liquidation preference, etc. The change brought about in April 2010 made use of these instruments practically distinct by taking away the pricing flexibility.

While the slump in inward capital flows last year cannot entirely be attributed to the FDI Policy, the regulatory expectation of upfront determination of the conversion price has been one of the biggest nuisance factors for foreign investors, especially private equity investors.

With the amendment in the FDI Policy, 20112, the position seems to have reverted back to as it was pre-2010, i.e. ‘formula based price discovery mechanism for conversion’ and accordingly, the promoters can link the price to the performance of the company. This seems to be an appropriate methodology for the company / its promoters and importantly, the investors. However, this will be subject to the condition that the price at the time of actual conversion should not be lower than the fair value at the time of the allotment of the convertible instruments.

Implications: Though the minimum pricing norms will be applicable (i.e. the discounted free cash flow (DCF) method of valuation for the unlisted companies and valuation in terms of Securities and Exchange Board of India (Issue of Capital and Disclosure Requirements) Regulations, 2009, for the listed companies), there is a freedom available to the investors to set any formula for conversion upfront at the time of allotment in so far as its price is not below the minimum pricing norms at the date of allotment. This will result in issuance of shares (upon conversion) at a premium to such price eventually. In our view, this change brought in the pricing mechanism of convertible instruments is likely to generate more interest and usage of such instruments in the coming future.

B.      FVCI regime: Some relaxations, some ambiguities remain

Earlier, a Securities and Exchange Board of India (“SEBI”) registered foreign venture capital investor (“FVCI”) was allowed to invest in a domestic Venture Capital Fund (“VCF”) (whether set up as a ‘company’ or a ‘trust’) registered under the SEBI (Venture Capital Fund) Regulations, 1996, under the automatic route (i.e. without any prior government3 approval). The previous version of the FDI Policy however made a distinction between a VCF structured as a ‘company’ (i.e. a venture capital company or VCC) with a VCF set up as a ‘trust’, in respect of receiving an investment by an FVCI. It allowed FVCI investment into a VCC under the automatic route whereas FVCI investment into a ‘trust’ VCF was mandated under the FIPB approval route.

Under the FDI Policy, 2011, it appears that an FVCI can invest in a VCF, set up as a trust, as per Schedule 6 to Foreign Exchange Management (Transfer or Issue of Security by a Person resident outside India) Regulations, 2000 (“TISPRO”) under the ‘automatic route’ i.e. without obtaining FIPB approval. The above liberalized position is however ‘discovered’ upon minute reading of the exclusion made from other classes of investors who still require approval for such investment. Accordingly, some ambiguities still remain.

As regards other classes of offshore investors, the FDI Policy, 2011 permits them to invest in a VCF company, i.e. a venture capital company (“VCC”), under the ‘automatic route’, while investment in a VCF trust would need prior FIPB approval.

Following is a diagrammatic representation of the approval process: 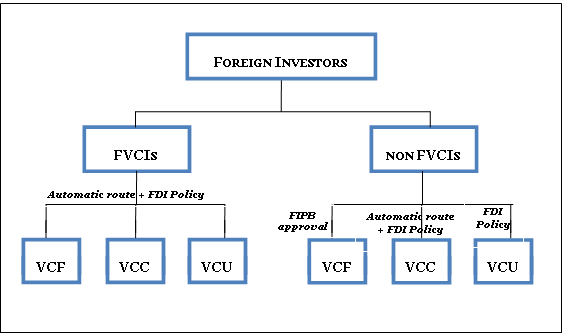 Implications: If view is taken that the FDI Policy, 2011 permits FVCI investments in a VCF, set up as trust or a company, under the automatic route, the same is justifiable as both FVCI and the VCF are regulated by SEBI, and also the fact that non-FVCIs are permitted to invest in VCF companies, under the automatic route. This change accordingly allows a commonly used ‘unified’ structure for India dedicated private equity funds, to be achieved without the need for taking prior approval from the FIPB. However, what the FDI Policy, 2011 fails to address is the curb Reserve Bank of India (“RBI”) imposes whereby investments by registered FVCI entities (the restriction is by way of a specific letter issued to some of the recently registered FVCI entities and hence, doesn’t include the earlier registrants) is restricted to select sectors. These restrictions significantly limit the investment horizon for FVCI entities and seriously disincline foreign investors from investing into India.

Continuing the move to phase out the 'protectionist' press note 18 of 1999, the FDI Policy, 2011 has dispensed with the condition whereby a foreign investor, which was already engaged in a joint venture or technical collaboration (entered before January 12, 2005), could not make a new investment into a similar venture unless the existing Indian partner gave its no objection and a specific prior Government approval was obtained in this regard.

Implications: Foreign joint venture partner (both financial and technical) will now be treated at par with its Indian joint venture partner and will now be able to explore Indian market. The move requires the local players to be competitive and possess strengths (both financial and technical) to withstand international pressure.

D.      Investment by FIIs under the FDI route would not be reckoned towards the 10% limit provided for investments under the FII route

This departure from the earlier stance resulted in overlap in the investments made under the different foreign inbound investment regimes. Furthermore, it also hindered the ability of FIIs to make FDI investments such as Global Depository Receipts (“GDRs”) / American Depository Receipts (“ADRs”), or preferential allotment, private equity investment. In fact, it created ambiguity for many FIIs who already owned FDI investment in excess of the 10 per cent limit, unsure whether they would be required to divest the excess or not.

The aforesaid position seems to have been reversed by the FDI Policy, 2011. The FDI Policy, 2011 acknowledges that FIIs can make both portfolio and strategic investments, within the aggregate sectoral cap. Though the language does not explicitly clarify but seems to follow the basic principle that each of the investment regimes is exclusive and distinct and a foreign investor can use any one or a combination of such regimes for investing in a company. However, the policy requires the company to pass a board resolution to increase the aggregate FII limits beyond 24 per cent subject to the applicable sectoral cap, if any.

Implications: The FDI Policy, 2011 appears to do away with the ambiguity which many FIIs were facing due to their investments in ADRs / GDRs of Indian companies, which are reckoned towards computing FDI. Considering that the clarification in this regard is not very precisely worded, as a matter of interpretation, a view may be taken that now, FIIs holding ADRs / GDRs of Indian companies can gain further exposure to such instruments and reckon them towards their holdings under the FDI route, instead of the exclusive 10% limit available under the FII route.

E.      Prior approval of government required for issue of shares in lieu of:

i.      import of capital goods/machinery/equipment (including second-hand machinery); and

A common commercial arrangement for newly incorporated companies or companies in need for capital expansion is issuance of its shares to the foreign company in lieu of the pre-incorporation expenses incurred by the foreign companies or the import of capital goods instead of payment in cash. In the FDI Policy, 2011, it has been provided that prior approval of the Government would be required in cases of issue of shares in lieu of:

i.            import of capital goods/machinery/equipment (including second-hand machinery); and

As a general condition for grant of permission by the Government, the foreign company should be eligible to subscribe to the shares of the Indian company under the FDI policy.

As per the FDI Policy, 2011, it is necessary that payments should be made directly by the foreign investor to the company. Payments made through third parties, citing the absence of a bank account or similar such reasons, will not be approved by the Government.

Implications: This leads to ambiguity, as the incurring pre-incorporation/operating expenses by the foreign company is usually an interim arrangement before the Indian company is incorporated or its bank account is opened.

While the FDI Policy, 2011 is an attempt in the right direction, there are various issues that either have not been clarified or have remained unaddressed. Some of which are as follows:

v      Retail sector is yet to have a formal investment regime in place, an overwhelming expectation that continues to loom large.

v      Regulatory vacuum exists for investments into LLP structures. The FDI Policy, 2011 does indicate that the Government is still deliberating on the same.

v      While warrants and partly paid-up shares can be issued by a concerned portfolio company, it can only be done under a specific FIPB approval.

Hopefully, these issues would be addressed in the next round of revision of the FDI Policy later this year. For the policy makers, the sudden slowdown of the valuable FDI should act an eye opener to shed the 'arrogance' of believing India being the only sought after destination by the global capital and remove the road blocks for the flow of the foreign capital into the country. One needs to recognise that capital flow is subtle and fluid and any unwarranted hurdle or even an administrative 'bump' could divert the flow of PE/VC capital to more efficient markets. The fight for global capital is only going to intensify as even developed markets would make a compelling case as they continue to emerge out of recession. A more proactive approach to policy making is the need of the hour.

1 Financial year 2010-11 witnessed a drop of 27% in FDI inflows into the country as compared to the previous year (source: Fact Sheet on Foreign Direct Investment (FDI) – this can be accessed at http://dipp.nic.in/fdi_statistics/india_FDI_January2011.pdf).

2 Clause 3.2.1 of the FDI Policy, 2011 states: “…Indian companies can issue equity shares, fully, compulsorily and mandatorily convertible debentures and fully, compulsorily and mandatorily convertible preference shares subject to pricing guidelines/valuation norms prescribed under FEMA Regulations. The price/conversion formula of convertible capital instruments should be determined upfront at the time of issue of the instruments.”