Justice and the Due Process of Law: The Vodafone saga continues

Would it be reasonable to assert that an extraterritorial transaction between two non-residents be subject to a country’s taxing jurisdiction? Could the sale of shares of a foreign company by one non-resident to another have any direct and substantial nexus with India? Has corporate personality lost its legal relevance in cross-border structures? And most importantly, is a government justified in propagating gross uncertainties in the international investment regime, especially at a time when capital inflow is the need of the hour?

The Vodafone saga represents an assessee’s quest to obtain final resolution of seemingly long-settled issues in international taxation and a defence to the onslaught of the tax authorities, now more than determined to claim its share of a bounty of unprecedented proportions. To summarize the story so far, in 2007, HTIL of Cayman Islands sold shares of another Cayman Islands entity, CGP Investments, to Dutch-based Vodafone International Holdings BV (“Vodafone”) for a consideration of USD 11.1 billion. CGP Investments held a number of Mauritian and Indian subsidiaries, which cumulatively owned a 67% stake in Vodafone Essar Limited (“VEL”), a company based in India. 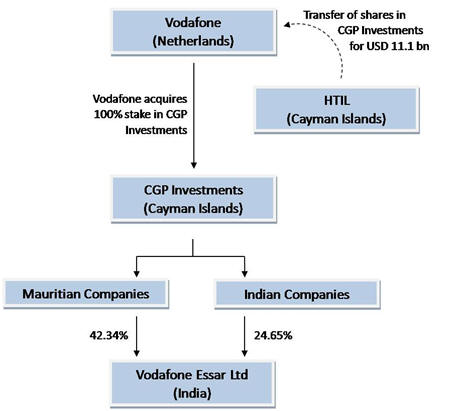 It seemed like a tax-free transaction, far away from the fiscal shores of India. The tax authorities were, however, prompt in issuing notices to Vodafone and VEL, asking them to show-cause why Vodafone cannot be considered an ‘assessee-in-default’ for failing to withhold tax due on the consideration paid to HTIL. Taken by surprise, Vodafone approached the Bombay High Court in writ jurisdiction challenging the show-cause notices. Since Vodafone could not establish that the notices were non-est in law, the petition was dismissed on grounds of maintainability. The High Court also took the liberty of making observations to the effect that Vodafone had indirectly acquired the controlling interest of VEL in India thereby landing the transaction within the frontier of the Indian tax net.

Standing by its guns, Vodafone then filed a special leave petition (“SLP”) before the Supreme Court under Article 136 of the Constitution of India against the decision of the Bombay High Court. The Supreme Court, however, dismissed the SLP and remanded the matter back to the tax authorities who, on the basis of the relevant agreements and facts, would inter alia decide the most fundamental issue of whether there even existed a jurisdiction to issue a notice for subjecting the transaction to tax.1 The Supreme Court essentially relied on the principle affirmed by it in Express Newspapers2 that the initial authority of a Tribunal to determine basic jurisdictional facts cannot be circumvented by filing a writ in the High Court.

While it may seem that it is back to the drawing board for Vodafone, the Supreme Court has permitted Vodafone to approach the Bombay High Court directly on the question of jurisdiction once the tax authorities have made a determination on this issue. It should be noted that, up till now, no final determination has been made on the merits of the case, that is, whether Vodafone is liable to deduct tax on the consideration paid to HTIL or not. The views of the Bombay High Court in this regard are merely obiter and do not lay down any final proposition of law. Further, as emphasized by the Supreme Court itself, in Express Newspapers, the lower authorities are bound to independently deal with the issue on merits without being influenced by the Appellate Court’s observations.

The Vodafone saga, as it has unfolded till now, makes it clear that justice is truly a consequence of the operation of due process of law. While it requires Vodafone to justify its stance on lack of jurisdiction before the tax authorities, it also mandates that the tax authorities make an independent assessment of the issue on merits. On the basic issue of jurisdiction, the Bombay High Court is bound to exercise its constitutional role of judicial review to make a final determination of whether it is reasonable, in fact and in law, to extend the Indian tax net to an extra-territorial transaction carried on between two non-residents.

The Vodafone saga has definitely added a new dimension to the structuring of cross-border mergers and acquisitions. But to what extent it should raise concerns, only time will tell.