At a time when India’s current account deficit stands at a record high, the Finance Minister has kicked of a spade of reforms to rationalize and simplify the route of debt investment into India. The Finance Minister speaking at a conference on March 23, 20131 pointed out that the current account deficit can be financed through foreign inflows, on account of which he announced a major rationalisation of foreign investment in government securities and corporate bonds. Accordingly, the various sub-limits for investment in debt in India have now been broadly merged into two categories – government debt and corporate debt, vide two circulars issued by the Reserve Bank of India (“RBI”)2 and Securities and Exchange Board of India (“SEBI”)3 (together, referred to as the “Circulars”). More importantly, the process for allocating limits through auctions has been liberalized significantly, as now until overall investment reaches 90% of the total debt limit, investments can be made by eligible investors without going through the auction process.

Foreign Investment in rupee denominated debt instruments till date has been largely classified into government and corporate securities. Under these two major classifications several sub-limits were created with varying limits based on the investor, instrument, maturity, sector and lock-in etc., which over a period of time became increasingly complex

To broadly summarize the limits as they stood, the G-secs (or government securities) overall limit stood at USD 25 billion with a split of USD 10 billion allotted to government securities and USD 15 billion allotted to government dated securities. Further, the corporate debt of USD 51 billion stood divided as follows – (i) Qualified Foreign Investors (“QFIs”) – USD 1 billion; (ii) non-infrastructure sector corporate debt securities - USD 25 billon; and (iii) infrastructure sector - USD 25 billion. These limits were in turn sub-classified based the factors mentioned above. The table herein below illustrates the various broad categories in which the debt limits were categorized: 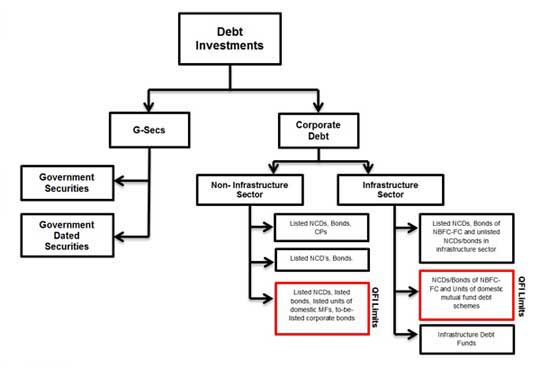 Post April 1, 2013, SEBI and RBI have vide the Circulars merged the existing debt limits into two broad categories as under:

The table herein below (reproduced from the RBI circular) summarizes the revised position on debt categories:

However, the Circulars have allowed FII / sub-account, along with QFIs to invest in corporate debt without purchasing debt limits till the overall investment reaches 90% of USD 51 billion (i.e. USD 45.9 billion) after which the auction mechanism would be initiated for allocation of the remaining limits. Further, it is provided that the facility of re-investment and the restrictions thereon as per SEBI Debt Limit Circulars shall not apply to the limit held or investments made by FII / sub account within the initial 90% of the available debt investment limit of USD 51 billion for Corporate Debt (USD 45.9 billion).

The rationalization of sub-limits will be welcomed by FIIs and other investors who will now seek to take up the under-utilized sub-limits through the “on tap” mechanism. With the finance minister encouraging foreign rupee denominated debt to cope up the current account deficit, a larger number of foreign players are likely to tap this route for investing into India.

Extending the same principle of usage of 90% of debt limits ‘on tap’ to the entire USD 51 billion limit, is a huge boon to the investment community, especially on two counts – (i) this would reduce the cost of the investor; and (ii) the investor would no longer be under an uncertainty as to whether would be able to acquire the debt limits, which became a huge concern especially when the ability to re-utilize the debt limits available was restricted under the SEBI Debt Limit Circulars.

Availability, allocation and expiry of debt limits and bidding for them were one of the largest challenges that were keeping foreign investors from considering such listed debt instruments. However, with such simplification and importantly buy-backs being now subjected to an additional tax of 20%, foreign investors are likely to take the structured debt route for investing into India, especially in those classes where returns are expected by way of cash up-streaming.

– Prasad Subramanyan, Deepak Jodhani & Ruchir Sinha
You can direct your queries or comments to the authors

1 Press Information Burea, Government of India, Rationalisation of Foreign Investment in Government Securities and Corporate Bonds to be Operational by April 1, 2013: FM, available at http://pib.nic.in/newsite/mbErel.aspx?relid=94260 (last visited on April 04, 2013).

Are you a social media influencer or doctor? Here's how the new TDS rules will impact you
June 26,2022

NCLAT Order in Amazon/FCPL Is a Missed Opportunity for Answering Substantive Questions of Law
July 01,2022