Dawn of a New Era: All Medical Devices in India to be Regulated from April 2020

The MDR provides for a risk-based classification system with four categories from A to D for low risk, low moderate risk, moderate high risk and high risk respectively.3 Devices in classes C and D are regulated more stringently that devices in classes A and B as the former are considered to be high risk devices.

2.Impact of a Medical Device being Regulated under the MDR

- Additional Compliances under the MDR

The MDR divides the regulation of medical devices into the following broad activities – clinical investigation, clinical performance evaluation, import, manufacture and sale. At each stage of the production to consumption cycle, appropriate permissions are required to be obtained from the CDSCO (or other relevant state authority, as the case may be) in respect of the relevant activity. To elaborate, different permissions (in the form of licenses) are granted for importing medical devices, for conducting clinical investigations/clinical performance evaluations, and for manufacture and sale of such devices. Therefore, the level of compliance required to be undertaken by a manufacturer or importer of a Regulated Device will increase significantly. A detailed analysis of the requirements of the MDR are covered in our paper on the medical device industry, available here .

In addition to procuring the appropriate licenses, the MDR also imposes strict quality control requirements on medical devices. Regulated Devices are required to follow standards set by the Bureau of India Standards (“BIS”). In the absence of BIS standards, manufacturers of Regulated Devices should follow standards laid down by the Health Ministry, the International Standards Organization or the International Electrotechnical Commission in that order.5 The MDR also prescribes a Quality Management System to be followed by manufacturers of Regulated Devices.6

All drugs (which include notified medical devices) are subject to price control in some form under the Drugs (Prices Control) Order, 2013 (“DPCO”). Therefore, Regulated Devices would also be subject to price control under the DPCO, either by being restricted from increasing the price of the product by more than 10% over the preceding twelve months7 or having its ceiling price8 notified by the National Pharmaceutical Pricing Authority.

- Greater Oversight by the Health Ministry

3.Overview of the Notification

Once the New Definition Notification comes into force, the MDR will apply to all medical devices except for the devices in Annexure A (“New Devices”). Annexure A contains the list of medical devices that have been specifically notified thus far.

“All devices including an instrument, apparatus, appliance, implant, material or other article; whether used alone or in combination, including a software or an accessory, intended by its manufacturer to be used specially for human beings or animals which does not achieve the primary intended action in or on human body or animals by any pharmacological or immunological or metabolic means, but which may assist in its intended function by such means for one or more of the specific purposes of -

Therefore, once the New Definition Notification comes into effect, manufacturers and importers of New Devices would be required to obtain manufacturing and import licenses under the MDR to engage in the manufacture and import of medical devices.

The details required to be uploaded by manufacturers and importers of the New Devices are specified in Annexure 2. 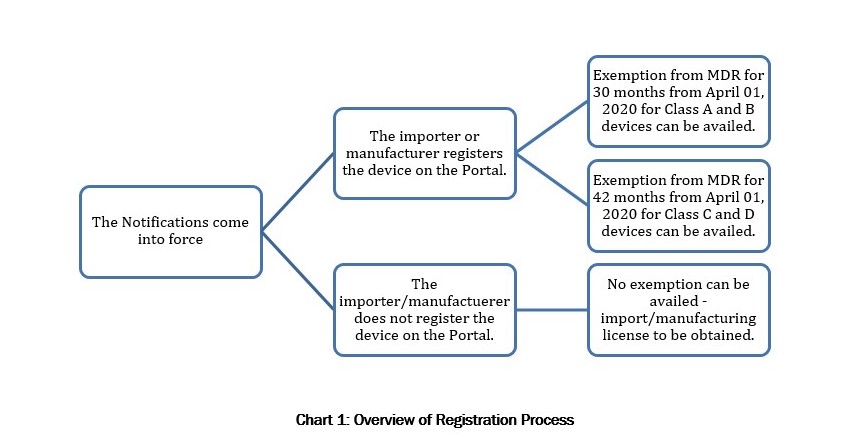 Registering the New Devices is a pre-condition to availing the Exemption Provision. Therefore, manufacturers and importers will be compelled to register the New Devices to avail the Exemption Provision or not import/manufacture the New Device until they obtain the requisite licenses. In the event the Portal is not operational on time or experiences technical difficulties, medical device companies may be forced to halt operations entirely after April 01, 2020 until they are able to register their medical device.

Alongside the registration process, manufacturers and importers will be required to apply for manufacturing and import licenses with the CDSCO, in order to comply with the larger ambit of the MDR once the Exemption Provision expires – a process that typically takes nine months to complete. However, given the large volume of applications the CDSCO is bound to receive, processing the applications may take even longer. This issue may be further compounded as the CDSCO is currently inadequately staffed to deal with such a large volume of applications.

As a result, manufacturers and importers who have not been granted the required licenses at the expiry of the Exemption Provision despite having registered their New Devices and applied for licenses well in time will be forced to halt operations.

While halting business operations is certainly a concern from a business perspective, the more significant ramification is from a patient safety perspective. Gaps in supply of medical devices could leave patients without the care they need and can even be life threatening in cases where patients need devices such as pacemakers.

Ideally, the Exemption Provision should have been de-linked from the requirement to register the device. This way, New Device manufacturers/importers would have had the full 30 or 42 months to register their New Device. Additionally, manufacturers and importers who have registered their New Device on the Portal and applied for a manufacturing/import license should have been permitted to carry on business activities on a provisional basis at the expiry of the Exemption Provision, until either a license is granted or the application is rejected. This may have helped stagger the workload on the CDSCO without requiring medical device companies to halt their business activities.

The manufacturer or importer is also required to specify the class of the medical device sought to be manufactured or imported when entering the details of the medical device on the Portal. The CDSCO will therefore be required to classify a large number of medical devices before the registration requirement comes into effect which, given the impending timeline, appears to be a herculean task. The CDSCO should ideally clarify whether importers/manufacturers can self-classify based on similar classifications in other jurisdictions, in order to ease the transition.

Additionally, before the Exemption Provision expires, the CDSCO would also be required to ascertain which of the medical devices registered on the Portal may be considered to be investigational medical devices12/new in-vitro diagnostic devices.13 Broadly, this would require the CDSCO to look into whether each device registered on the Portal has a history of safe use in India, or whether the medical device needs to undergo clinical testing before it can be considered to be safe and efficacious for use in India. It is currently unclear whether existing devices in the market, although sold for a long time in India, would be considered to be investigational devices, given that safety and efficacy data was not required to be generated when the device was first launched. Due to this, it is possible that the first applicant of each category of medical device would be required to undergo clinical evaluations before the device can be re-introduced into the market. Effectively, this means that there could be an availability gap of numerous devices, until approvals are granted for the re-introduction of the device post the expiry of the Exemption Provision. Ideally, the CDSCO should clarify the parameters to determine when a New Device would be considered to be an investigational medical device.

- Status of Medical Devices Exempted under the Registration Notification

The medical devices that have already come under the purview of the MDR or will be coming under the purview of the MDR over the next year have been specifically excluded under the Registration Notification. As a result, these devices are not required to be registered on the Portal. Further, these devices would also be exempt from compliances under the MDR until the date the medical device is slated to come under regulation. For instance, MRI equipment which has been notified under the MDR with effect from April 01, 2021 would not be governed under the MDR by virtue the Notifications (and therefore no registration of MRI equipment would be required).

However, MRI Equipment would be governed by the MDR with effect from April 01, 2021. Therefore, manufactures and importers of MRI Equipment would be required to obtain the requisite licenses prior to April 01, 2021 to carry on commercial activity relating to MRI Equipment thereafter. Typically, the regulators take anywhere between 9 to 12 months to grant an import/manufacturing license. Therefore, the CDSCO and state licensing authorities should start accepting applications for the granting manufacture/import licenses in respect of the devices in Annexure A which are yet to come under regulation. A delay in obtaining/grant of license would force the manufactures/importers of these devices to cease business operations in respect of the device and would lead to a loss in business and revenue for the medical device manufacturers.

Even aside from the Notifications, the medical device regulation space has been experiencing a lot of activity. Earlier in November 2019, the NITI Aayog – the Indian Government’s policy think tank – submitted a draft bill to the Indian Government proposing to create a separate regulator for medical devices. The bill, titled the Medical Devices (Safety, Effectiveness and Innovation) Bill, 2019 also aims to introduce a Unique Identification Number on all medical devices, increase penalties for non-compliance as well as tighten the regulation applicable to clinical investigations.14 Therefore, it is peculiar how there is simultaneously a push towards regulating medical devices under a separate legislation and regulator, and towards bringing all devices under the ambit of the MDR. Nonetheless, the effectiveness of the Notification is in its implementation and in a few months, the proof will be in the pudding.

(iv) such devices intended for internal or external use in the diagnosis, treatment, mitigation or prevention of

disease or disorder in human beings or animals, as may be specified from time to time by the Central Government by notification in the Official Gazette, after consultation with the Board.

12 Investigational Medical Device is a device which (i) does not have a predicate device i.e. the device is

first of its kind, or (ii) has been approved but is now sought to be launched for a new intended use or new population or new material or major design change.

been approved for manufacture for sale or for import by the Central Licensing Authority and is being tested to establish its performance for relevant analyte or other parameter related thereto including details of technology and procedure required.