English Court’s dictum on the “Without Prejudice” Rule

The “without prejudice” rule governs admissibility of evidence and is founded on the public policy of encouraging litigants to settle their differences rather than litigate them towards a conclusion.1 The underlying purpose is to encourage settlement2 and ensure litigation is avoided. However, there may be certain instances which call for exceptions to this rule.

A pension scheme (“Scheme”) was entered into between Employers/Claimants and their employees. As a part of the Scheme, several deeds were executed, primarily, with the intention to limit the benefits accruing to the members of the Scheme and reduce the burden on the participating employers. 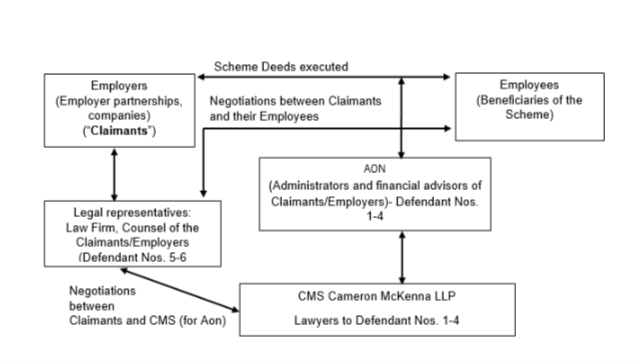 Trustees and Employers of the Scheme had brought a claim against the Employers/Claimants and their Employees– to determine the validity of the executed deeds. As part of these proceedings, it was held that trust deeds prepared by Aon (Defendant Nos. 1-4) for the Scheme and executed between 1991-2010 were invalid and of no effect. Due to the invalidity of these deeds, the financial burden on the participating employers was not reduced.

Pursuant to the decision rendered in the Part 8 Proceedings, there were two rounds of “without prejudice” discussions:

Between lawyers (“Legal Representatives/Defendant No. 5-6”) acting for the Claimants and the lawyers for Aon (i.e. CMS Cameron McKenna LLP) on - whether to appeal against the judgment rendered in the Part 8 Proceedings, evaluation of the practical and financial outcome of the said judgment. (“Negotiations between Aon and Claimants”)

While permission was granted to appeal, negotiations were initiated between the Claimants and their Employees (“Negotiations between Claimants and their Employees”). These negotiations were conducted on behalf of the Claimants by the Legal Representatives. The parties arrived at a settlement (“Settlement”) which was approved on 11 October 2016. Consequent to such Settlement, the employees received their intended benefits as members of the Scheme with further final salary benefits. Thus, benefits accrued to the members were not limited, which would have been if the deeds had been validly executed.

The Claimants initiated the present proceedings, against Aon (“Defendant Nos. 1-4”) and the previous lawyers of the Claimants (“Legal Representatives/Defendant Nos. 5-6”), (together known as “Defendants”) for damages for professional negligence towards preparation and execution of deeds.

The Defendant Nos. 1 - 4 alleged that the Legal Representatives should have raised certain arguments during the Part 8 Proceedings or the Negotiations with the Beneficiaries (“Scheme Participation Argument”). The Legal Representatives’ failure to raise this argument, was a new and intervening act, which broke the chain of causation of any liability of Aon.

The Legal Representatives maintained that Aon had always been kept in the loop - on the Part 8 Proceedings and the Negotiations between Claimants and their Employees leading up to the Settlement. The Scheme Participation Argument had also never been brought up by Defendant Nos. 1 - 4.

As part of defense, the Legal Representatives sought to rely on the “without prejudice” communication5 between Aon and Claimants lawyers to analyze the extent of involvement of Aon’s lawyers/Aon. The Defendant Nos. 1-4 objected to the same.

The High Court examined how “without prejudice” privilege operates and how and when such privilege can no longer be relied upon.

“Without Prejudice” - Rule and Exceptions

Negotiations attempting to compromise a claim in the proceedings are immune from disclosure in the same proceedings.

Rule: Privilege of the “without prejudice” rule

Exception: When the relevance of “without prejudice” documents/communication is independent of the veracity of facts or admissions contained therein; and the issues would not be justiciable without disclosure of the negotiations

5 It was not a matter of dispute that the correspondence in question was without prejudice to the claim brought by the Claimants against Aon, by its nature as well as by the conventional use of the “without prejudice” heading.

8 A similar finding was made with respect to the contributory claim made by Aon.

9 The Evidence Act 1872, s 23: “Admissions in civil cases, when relevant— In civil cases no admission is relevant, if it is made either upon an express condition that evidence of it is not to be given, or under circumstances from which the Court can infer that the parties agreed together that evidence of it should not be given. Explanation— Nothing in this section shall be taken to exempt any barrister, pleader, attorney or vakil from giving evidence of any matter of which he may be compelled to give evidence under section 126.”

SEBI Settlement Order – Research Analysts Not to Provide Model Portfolio Products
Regulatory Hotline: May 18,2022Effects of the pandemic on M&A - Episode 1
Audio : May 17,2022

Withdrawal of amount deposited in escrow account by buyer deductible from sale consideration
May 12,2022